The Singleton Strikers began season 2016 in fine form last Sunday in the local derby games at Cessnock. For the first time in many years, all 4 Strikers grade sides returned home undefeated with the highlight being a 7-0 drubbing handed out by the Strikers U19’s.

The day started with the Betts Bower Haulage U17 recording a 0-0 draw. In a very even affair, Singleton were perhaps unlucky not to score through good efforts on goal by Hamish Mayled, but Cessnock also had good chance and were only thwarted by the good form of goalkeeper Brae Wissink.

The Viatek U19’s took the field next, and were soon in control as Nathan Hall capped a mazy run through the Cessnock defence with a well taken goal.

Just a minute later, Will Holz earned his team a penalty kick, and captain Tom Golding made no mistake from the spot to make it 2-0.

Holz then capitalised on good lead up work by Nathan Smart to add a third in the shadows of half time. 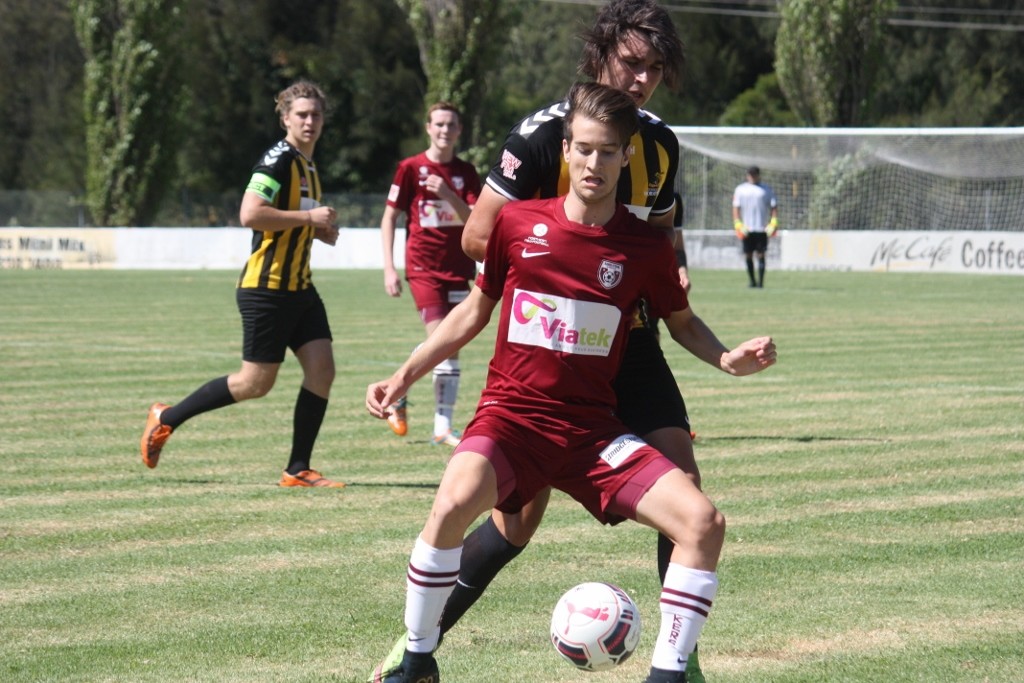 Will Holz strong on the ball for the Strikers.

The second half continued in the same vein with Nathan Smart bagging himself a brace before Will Holz and Nathan Hall both found the goal for a second time to bring up the 7-0 scoreline.

Coach Todd Geddes and the U19’s recognise that it’s only very early days, but the nature of the win over a traditionally strong Cessnock side was a terrific start to season 2016.

As the day warmed up, the ATC Williams U23’s took the field. The energy sapping temperatures soon took their toll, and the game turned into an arm wrestle with a ding dong battle being played out in midfield.

In the dying minutes, the best chance of the game fell to Singleton’s Derek English as he rounded the stranded Cessnock custodian, but his shot hit the post and rebounded to safety as the game was played out as a 0-0 draw.

The Onekey Resources First grade team took the field in the days last game, and were soon under pressure with Stuart Plant being called on to make a good save early on.

It was a tentative start from the Strikers, but settled into the game and created good chances themselves with Zane Hand and Tyler Felsch both going close to breaking the deadlock just before half time.

Early in the second half, Cessnock took the lead in controversial circumstances. A lofted ball into the Singleton penalty area floated to an unmarked Cessnock player as the Strikers defenders all appealed for an offside decision that never came, and the goal was duly converted.

This spurred the Strikers on, and they soon equalised through a well taken goal to Dan Palozzi.

With 10 minutes to go, and Singleton finishing the stronger, hopes were high for a victory.

And a dubious penalty to Singleton could have given the Strikers the lead, but the normally reliable Jackson Cox hit the post with the keeper well beaten.

It was to be the last action in a closely fought game that therefore ended 1-1.

So, the Strikers came away from the opening day without defeat, and with the sensational performance of the U19’s leaving them the top of the table.

Next up is another FFA Cup game, the Round 3 clash against Dudley Redhead, being played at 5pm Saturday (12/3/2016) at Edgeworth.