The Singleton Strikers have gone where no Singleton team has gone before by winning through to a Round 7 FFA Cup game.

Saturday saw Singleton take on Thornton in the Round 6 games with the winner qualifying for a semi final spot on Sunday.

After falling behind to a Thornton goal at the 15 minute mark, the Strikers stepped up a gear and Thornton had no answer to the pace and precision of the Strikers attack.

Man of the Match Kieron Burrell was proving unstoppable on the left wing, and another of his sniping runs saw him restore parity when he swept in Singleton’s first goal. 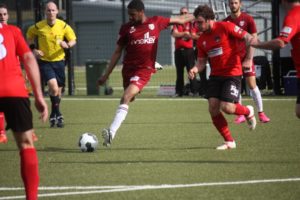 Kieron Burrell gets a shot away

The second half continued in the same vein – Singleton on the attack and Thornton scrambling to hold on.

In the end it was boom youngster Nathan Hall who settled the issue when he mesmerised the Thornton defence with a mazy run before poking the ball past a despairing Thornton goal keeper to make it 2-1. 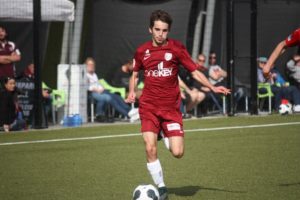 Nathan Hall on the run

Thornton redoubled their efforts but to no avail as Singleton’s defence – marshalled by the imperious Jackson Skinner – held firm.

The win put Singleton through to a semi final clash against reigning NPL Champions Edgeworth on Sunday.

Despite the pot of gold that awaited the players with a win on Sunday ( the last 32 teams nationwide, and a potential game against A League opposition) it proved to be a bridge too far, as Edgeworth showed why they are the best team in NNSWF with a comfortable 7-0 win.

Coach David Willoughby was over the moon with the performance, “It was a great weekend to be involved in, and we played some great football. It was a privilege to be part of the ride.”

The Strikers will look to carry their FFA Cup form into next Saturdays games away at Lake Macquarie.