The Singleton Strikers have hosted their annual School Holidays Coaching Clinic at Howe Park – the home of football in Singleton – with 76 young footballers being put through their paces over 3 days.

Now in its 3rd year, the coaching clinic represents a great opportunity for young players to hone their skills before the 2016 season kicks off on Saturday 23rd April. 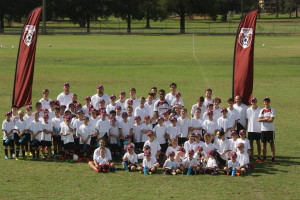 Mark Henderson, Board Chairman & convener of the clinic was ecstatic with the results. “It’s just terrific to see the future of the Strikers in such good hands. The kids have great fun……they learn new football skills from some of the best and most qualified coaches around, and they meet young Strikers who have graduated from the junior ranks into senior football…..just like the clinic participants will one day graduate. It is particularly pleasing to see a number of young girls involved in the clinic…..not just as players but also as coaches. Female participation in football continues to grow across the region”.

All participants were given a complete training kit including a Nike ball, morning tea & lunch, and there were also plenty of prizes up for grabs during the clinic…..representing great value for money.