The Singleton Strikers continued their run of good form with a 9 – 1 trouncing of Merewether Advance in their FFA Cup Rd 2 game last Saturday.

In a one sided affair, Singleton had the upper hand from the kick off, and it didn’t take long for prolific goal sneak Jackson Cox to open the scoring. 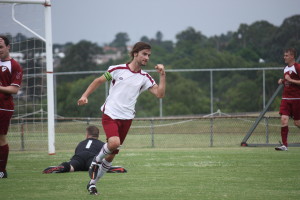 Jackson Cox on the way to 7 goals

Fullback Zane Hand made a telling run down the right wing and combined with Robbie Lopes to set up Cox for the first goal.

It proved to be the start of an avalanche, as the speed and skill of the Strikers Captain proved unstoppable.

Merewether ‘parked the bus’ in front of goal, and frustrated the Strikers for the next 30 minutes until UK import Alex Clarke and Cox combined in a flowing passing move that unlocked the Merewether defence just before half time and Cox added his second.

The second half followed the same script, and it wasn’t long before Cox capitalised on good lead up work by boom youngster Tyler Felsch to complete his hat trick.

Jackson Cox then made it 4, and then it was 5, as the diminutive ball player once again cashed in on good work by Clarke, who was relishing his wider role.

Dead ball specialist Alex Clarke then provided another assist when his free kick brought an outstanding save out of the Merewether goalkeeper, but the rebounded effort was pounced upon by Robbie Lopes for a tap in goal.

It was a soft goal, but normal transmission soon resumed when Cox scored his 6th, and Singleton’s 7th, with a wonderful individual effort that left Merewether’s bemused defenders clutching at straws.

Youngster Nathan Hall, on as a substitute for his First grade debut, was certainly not over-awed by the occasion and found himself on the score sheet with a neatly taken goal.

Jackson Cox then rounded out the scoring with another goal that was testament to the passing and movement of the Strikers in the attacking third.

It was Cox’s 7th goal for the match. An effort that had Club historians scurrying to check the record books.

Legendary scorer Anthony Castledine had twice recorded 6 in a game, and Dan Bartlett managed 6 in the FFA Cup first round last year, but Jackson Cox’s 7 goals has set a new standard.

The FFA Cup now goes into a break as the NEWFM First Division competition gets underway next weekend with an away game at Cessnock on Sunday.