NEWFM First Division ROUND 20 vs Kahibah

The Singleton Strikers braved the icy winds and bitter winter conditions on Saturday to share the spoils with visitors Kahibah FC.

The Betts Bower Haulage U17’s got the day underway and enjoyed an even start against the highly fancied Kahibah. But at the 30 minute mark the good work was wasted after Singleton lost the ball at the top of their own penalty spot. Goalkeeper Brad Fairclough managed to parry the first shot, but Kahibah pounced on the loose ball as the Singleton defense stood and watched.

It was enough to knock the confidence of the young Strikers and they coughed up possession again just minutes later, and a second goal resulted. To their credit, they composed themselves and held their own in the second half, but it was not enough to get back into the match.

The U19’s game promised to be a cracker with both sides harbouring hopes of semi final football, but Kahibah had the better of the opening exchanges, and Singleton had the unorthodox but effective Jeremy Wilde to thank for keeping them in the game as he pulled off a number of top shelf saves.

Singleton were not without their chances, and Jesse Mackaway went closest with a shot that sailed agonizingly wide.

The score line remained 0-0 at half time, but the game came to life early in the second period as Oliver Moody gave Singleton the lead. As is so often the case, Kahibah hit back straightaway.

The game looked like finishing as a stalemate until a shaggy Kahibah shot seemed to deceive everyone and floated into the net to secure all 3 points for the visitors.

It was a heroic effort from an understrength Viatek 19’s, but the loss has seen any chance of semi final football slip away. 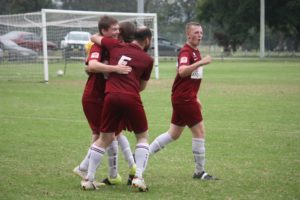 The Strikers Under 23’s also remain in semi final contention, and desperately needed the 3 points to continue their recent good form.

But the visitors Kahibah were also in good form….they had won their last 13 games straight, and also had designs on a semi final berth.

Kahibah began strongly, and custodian Ryan Guihot made a number of good saves as Kahibah probed for an opening goal. But Singleton played themselves into the game, and Tate Edwards gave Singleton the lead on the half hour on the back of good lead up work by Rob Field.

The second half saw the visitors push hard for victory, but Singleton were resolute in defense and held firm for a well deserved victory.

The Onekey Resources Singleton First Grade side also had a very different look to it as the absence of several regulars saw coach David Willoughby draft in a number of younger players.

But it was UK import Kieron Burrell who soon had the Strikers in the ascendency when he scored from a trade mark mazy run.

Singleton were forced into an early change when Sam Ford limped off with ankle damage, but they refused to let this unsettle them and remained solid for the remainder of the half.

The second half saw a desperate Kahibah increase the tempo, but Singleton had all the answers, and it was Burrell who once again unlocked the Kahibah defense as he simply bamboozled 4 defenders before slipping the ball to boom youngster Nathan Hall who made no mistake with a clinical finish.

It was a quality win from a Singleton team who will look back at points dropped during the season and wonder ‘what if?’

The Royal Hotel Singleton Strikers are on the road next Sunday at Toronto Awaba. The U17’s kick off at 9.15am, with the First Grade fixture starting at 2.30pm.